Forests on the Dinner Plate

Senckenberg scientists have published a comprehensive review paper on the ecological impact of the global food trade in the scientific journal “One Earth.” According to the study, the ecological costs of this trade, especially for coffee, cocoa, soy, and beef, remain high. Nonetheless, the researchers call for a differentiated approach to agricultural trade that also takes into account its positive effects.

“We all know, of course, that palm oil destroys the rainforest and that monocultures are harmful,” explains lead author Dr. Thomas Kastner of the Senckenberg Biodiversity and Climate Research Center in Frankfurt, and he continues, “But what are the concrete effects of global agricultural trade? Although individual aspects of this question are repeatedly addressed scientifically, there is surprisingly little research that applies a comprehensive global perspective. With our new study, we have attempted to fill this gap.”

To do this, an international team of scientists led by Kastner synthesized the results of more than a hundred recent studies that quantified the impact of food trade on food availability as well as on biodiversity loss and the ability of ecosystems to sequester CO2. “We focused on taking a broad view on land systems, including ecological, economic, and social processes,” adds Kastner.

In the past three decades, trade in food has more than doubled and now accounts for almost one quarter of the global food production. 80 percent of the world’s population live in countries that are net importers of food. Global trade also plays a central role in supplying micronutrients to people around the world. For instance, studies have shown that the trade provides essential minerals and vitamins to a large number of people, especially in countries scarce in agricultural resources.

But while agricultural trade is important for the food supply of countless people, it is also a major driver of deforestation and of the loss of natural habitats and biodiversity. In this regard, the assembled studies show a clear link between growth in agricultural trade and deforestation along with the associated impacts on the local ecosystems and biodiversity. The export of soybeans, palm oil, and beef from a handful of countries in Latin America and Southeast Asia destroys hundreds of thousands hectares of forest – every single year. Kastner comments, “In the European Union, emissions due to tropical deforestation account for 13 to 30 percent of the total carbon footprint of an average daily diet. In short, we are “eating” the forests!”

The increase in forest areas in many countries of the Global North does not compensate for this, and is often only possible because the deforestation is exported, in a manner of speaking. Regarding biodiversity, the researchers also hand the food trade a devastating report card. For example, studies show that international trade is the main driver behind the at-risk status of about 30 percent of all endangered species. The greatest threat to biodiversity is posed by oilseeds such as palm oil and soy, but also coffee, cocoa, and beef.

According to Kastner, this must also be seen as a political problem. “Many poorer countries are expanding their agricultural areas primarily for exports. While this strengthens their economies in the short term, it makes them dependent on trade – and at the same time vulnerable to economic crises.” Conversely, dependence on food imports can also be problematic, especially with increasing climate change. Kastner cites an illuminating example: studies covering the heat wave from 2008 to 2010 showed that it led to massive crop failures in Russia. Russia subsequently curtailed its exports, leading to shortages in the Middle East, which further studies have linked to protests and the Arab Spring.

However, the researchers also gained unexpected insights: Among other things, the global grain trade proved to be comparatively efficient – contrary to the high-impact trade in coffee and cocoa, for example. The grain trade supplies a large number of people with important calories and consumes fewer resources in the exporting countries than production aimed at self-sufficiency with current cultivation methods would do locally. “If we assume a fictitious scenario in which every region would produce these foods exclusively for self-sufficiency, humanity’s deforestation and biodiversity footprints would be significantly larger,” explains the Senckenberg researcher.

Kastner calls for enhancing the positive aspects of the food trade and for exploring the synergies between environmental protection, agricultural land use, and our diet in greater detail. “Additional data are needed here, as well as increased interdisciplinarity, so that scientific findings can be incorporated into policy more rapidly.“ For example, there is a need for closer scrutiny of the quality of traded products and their contribution to a balanced diet. At the same time, ecosystems should be considered in a more holistic fashion, since the trade changes ecosystems while at the same time depending on their sustainable productivity. “However, there is also an urgent need to curb the negative aspects of the global food trade – not least with regard to the United Nations’ Sustainable Development Goals,” adds Kastner in conclusion. 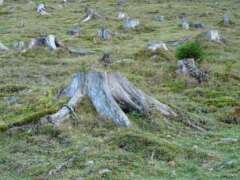 While agricultural trade is important for the food supply of countless people, it is also a major driver of deforestation, natural habitat loss, and biodiversity loss. Photo: Wikimedia Commons