Together with an international team, Senckenberg scientist Sonja Wedmann discovered a previously unknown species of fly in the UNESCO World Heritage Site “Messel Pit.” The researchers were able to document pollen from various plant species in the abdomen of the approximately 47-million-year-old insect. This allows conclusions regarding the fly’s feeding behavior, its ecology, and its role as a pollinator in the past. The study was published today in the scientific journal “Current Biology.”

Bees, bumblebees, and butterflies are widely known pollinators of flowering plants who, to some degree, also feed on pollen. “Yet, it is often ignored that flies also play an important role in this regard,” explains Dr. Sonja Wedmann of the Senckenberg Research Institute and Natural History Museum in Frankfurt, and she continues, “Our latest research results show that dipterans fed on pollen as long as approximately 50 million years ago!”

Together with a team from the USA, Austria, and Germany, Wedmann described a new species of fly from the UNESCO World Heritage Site “Messel Pit.” The new discovery in the genus Hirmoneura has a body length of eleven millimeters and an age of 47.5 million years. “The most remarkable observation, however, is the fact that we discovered a large amount of pollen in the abdomen of this insect, which belongs to the family Nemestrinidae – in other words, we discovered its last meal,” adds the Messel researcher. This is the first indication that flies from this family fed on pollen in the past – and possibly continue to do so until today.

Using innovative palynological methods, the team was able to identify pollen from plants of the families Sapotaceae (sapotes) and Oleaceae (olives) as well as members of the recent genera Decodon (water willows) and Parthenocissus (Virginia creepers). By means of photogrammetry it was possible to highlight the mass of pollen in the fly’s abdomen as a three-dimensional bulging area.

“Such fossil food remnants are extremely rare on a global scale. They allow inferences as to the animals’ lifestyle and feeding behavior as well as the environmental conditions under which the animals lived at the time,” explains Wedmann.

Even though the Messel flora is characterized by elements of (sub)tropical forests, the stomach content of the newly discovered fly suggests that it did not find its food in a dense, closed forest. With more than 50 percent, pollen from Virginia creepers (Parthenocissus) constitutes the majority of the pollen consumed, followed by the pollen from water willows (Decodon). The latter is an herbaceous plant, usually between one half to two meters tall, which grows in shallow water bodies and along their banks. The large volume of Parthenocissus pollen supports the hypothesis that the fly fed on plants that grew along the edge of the forest and the Messel lake. Wedmann adds, “The flies undoubtedly avoided long-distance flights between their food plants to save energy. We therefore assume that the plants associated with the pollen could be found within a relatively small area.”

In their study, the authors emphasize the flies‘ role as pollinators as long as 47 million years ago. “We assume that the flies played an important role in transporting the pollen, and thus in the propagation of several plant families. It is possible that flies were – and still are – more important than bees for the pollination of tropical plants,” adds Wedmann in conclusion. 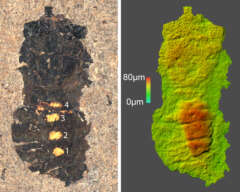 The body of the fossilized fly contains a mass of pollen (bulging area in the 3D relief on the right highlighted in red; the yellow areas on the left  indicate the sampling sites). Photo: Senckenberg