Over 50 Percent Of All Turtle Species Are Threatened

New Atlas of the Turtles of the World has been published

An international team of scientists from the USA, France, Australia, and Germany, including Senckenberg researcher Uwe Fritz, just published the ninth edition of the atlas “Turtles of the World.” The publication includes not only detailed descriptions of all 357 turtle species, but also information on the at-risk status of all species and a comparison of their current and original ranges. The results presented by the research group headed by the lead author Anders G.J. Rhodin (Chelonian Research Foundation and Turtle Conservancy) are alarming: About half of the world’s turtle species are threatened with extinction. The animals are particularly affected by habitat loss and excessive capture for consumption and the pet trade.

With a carapace length of 226 centimeters, the leatherback turtle Dermochelys coriacea is the largest marine turtle in the world. On land, the Seychelles giant tortoise Aldabrachelys gigantea sports an impressive carapace up to 138 centimeters in length. The Vallarta mud turtle Kinosternon vogti is much smaller – the shell of the world’s smallest freshwater turtle only measures 10.2 centimeters. These records from the animal kingdom can all be found in the ninth edition of the “Turtles of the World” atlas, which was released today. “Here, we provide a compilation of all 357 scientifically recognized turtle species in the world that still exist today,” explains Prof. Dr. Uwe Fritz of the Senckenberg Natural History Collections in Dresden, and he continues, “But that’s not all: In the new edition, we also shed light on the at-risk status of the turtles and compare their original distribution range with their current distribution. With this, we provide national and international legislation as well as nature and species conservation with a solid basis for action.”

No fewer than 171 turtle species are considered threatened – five species and subspecies each have already been extirpated in historical times and the recent past. “Large species that depend on special habitats are particularly affected. For example, all large Asian turtle species that originally occurred in estuaries or rivers are threatened with extinction. Their habitats are becoming increasingly restricted, their eggs are being poached by humans, and even today, the large animals are still being slaughtered for food,” said the herpetologist from Dresden. According to the study, turtles are among the most endangered vertebrates in the world – only primates appear with a higher percentage on the list of threatened species.

The ranges of nearly all turtle species have become drastically reduced compared to their original habitats. The reasons for this are habitat loss and degradation of previous habitats due to overuse or alteration. The ranges of the large Burmese roofed turtle Batagur trivittata and the Burmese star tortoise Geochelone platynota in Myanmar, as well as the habitats of the South African geometric tortoise Psammobates geometricus, have shrunk by at least 90 percent.

“Those are dramatic numbers that must lead to comprehensive protection of the turtles as quickly as possible. Otherwise, these animals, which have witnessed the rise and fall of the dinosaurs, will be lost forever!” warns Fritz. 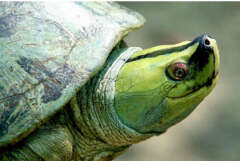 The range of the large Burmese roofed turtle Batagur trivittata has shrunk by at least 90 percent. Photo: Rick Hudson 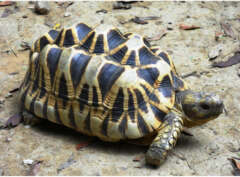