Company for the Greta Spider

25 new species were described in the spider genus Thunberga

Senckenberg scientist Peter Jäger described 25 new species of spiders in the genus Thunberga, which was named after Swedish climate activist Greta Thunberg. The arachnologist from Frankfurt dedicated three of the newly discovered species to persons known for their impressive activism: Jyoti Kumari, Boyan Slat, and Malala Yousafzai. The study, published today in the scientific journal “Arachnology,” provides insights into the distribution and love life of these eight-legged creatures.

The spider genus Thunberga, native to Madagascar, was first described about half a year ago. “At that time, hardly anything was known about these spiders,” says Dr. Peter Jäger of the Senckenberg Research Institute and Natural History Museum in Frankfurt, and he continues, “Since then, I have newly described 25 species in this genus. This shows that the Thunberga huntsman spiders are much more diverse than previously assumed.”

In the new study, the arachnologist from Frankfurt published photos of living spiders from the genus Thunberga that offer insights into the lifestyle of these animals. Apparently, the spiders hunt at night in the foliage and also ambush their prey inside of flowers. “In addition, for the first time we were able to document the occurrence of this genus outside of Madagascar. One of the newly described species was found on Mayotte, an archipelago  between the northern tip of Madagascar and Northern Mozambique,” adds Jäger. Most of the species are endemic and can only be found within small, narrowly delimited areas.

Using photos and morphological comparisons, Jäger hopes – at least indirectly – to gain insights into the behavior and ecology of these eight-legged critters. “A particularly exciting find in this context are scars that we have discovered on females of 16 species. These traces are missing in youngsters and males,” explains Jäger. He refers to these scars as “love bites” – based on the assumption that the male restrains the female prior to or during the mating act with his fangs, causing these injuries in the process.

Last year, Jäger named the spider genus in honor of the young climate activist Greta Thunberg to draw attention to the threat to species diversity on Madagascar and around the globe due to climate change. “In this vein, it only seemed consistent to name some of the new species in honor of persons whose actions have made a lasting impression on me,” explains Jäger. Thunberga jyoti honors the willpower and courage of then 15-year-old Jyoti Kumari from India, who carried her injured father on her bicycle over 1200 kilometers to his native village where he could undergo treatment. The species description contains the following quote: “The name stands for all loving and caring persons on our planet.”

Another species – Thunberga boyanslat – carries the name of the Dutch inventor, entrepreneur, and environmental activist Boyan Slat, who developed a passive system for trapping plastic waste adrift in the ocean currents. And Malala Yousafzai from Pakistan, a children’s rights activist, the youngest Nobel Peace Prize laureate, and UN Peace Ambassador, also became the namesake of a huntsman spider species. “Greta is now in excellent company,” adds Jäger with a smile. In the future, he hopes to discover further details about the ecology and biology of these spiders. 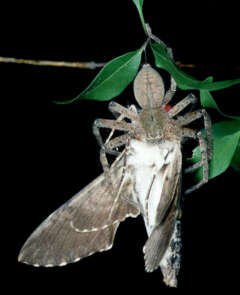 A female Thunberga wasserthali hunting for prey. A rare photo documentation of the behavior of these newly described spiders that appear to ambush their prey in the foliage at night. Photo: L.T. Wasserthal 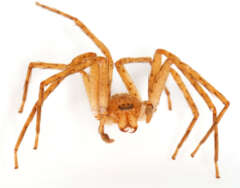 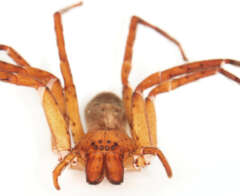 Another species – Thunberga boyanslat – bears the name of environmental activist Boyan Slat from the Netherlands, who developed a passive system for trapping plastic waste adrift in the ocean currents. Photo: Senckenberg 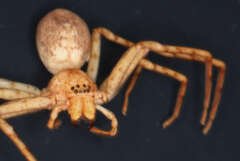 Peter Jäger used the name Thunberga jyoti to acknowledge the willpower and courage of the 15-year-old Indian girl Jyoti Kumari, who carried her injured father on her bicycle on a 1200-kilometer-trek to his native village where he could be treated for his injuries.