A new study by Senckenberg researchers finds that ecosystem services provided by animals in Neotropical rainforests can be notably compromised even if only a small fraction of large-bodied animal species is lost. This is the conclusion the researchers draw from a simulation of how ecological networks between plants and frugivorous birds might develop in the future and what effects this would have on the ecosystem. The authors of the study recently published in ‘Nature Communications’ warn against underestimating the effects of downsizing in animal communities.

Tropical rainforests are emptying out due to the ongoing extinction of animal species caused by overhunting and habitat fragmentation. But not only species as such, also the number of individuals of species living in rainforests continue to decline. Large-bodied species, which are particularly sensitive to changes, decline at a comparably faster rate than other species. A new study by researchers at the Senckenberg Biodversity and Climate Research Centre shows that the resulting animal downsizing in rainforests might have severe consequences for ecosystem services.

“The effect of downsizing of animal communities is three times larger for services that are provided by ecological networks than for their structural stability. This is because the species that die out first are those who contribute unique services and keep the rainforest function“, says researcher Dr. Isabel Donoso, an Alexander-von-Humboldt fellow who led the study at Senckenberg.

Donoso and her team simulated the effects of the loss of large-bodied fruit-eating birds for eight locations in the Andes. The simulation was based on data about interactions between bird and plant species recorded over many years in the study region. To measure the ecosystem services provided by birds, the researchers simulated the distance of avian seed dispersal. Seed dispersal by animals is a pivotal service in rainforests as most tropical trees require animals to disperse their seeds. The study is one of first attempts to quantify the consequences of animal downsizing for the functioning of rainforest ecosystems.

“If the largest 10 percent of the fruit-eating birds were to die out, the distance over which seeds would be dispersed would shrink by almost 40 percent. In contrast to this, the structural stability of an ecological network would be changed to a much lesser degree. A 10 percent loss of the largest fruit-eating birds would reduce the number of interactions between frugivorous birds and plants by only 10 percent,” says Dr. Matthias Schleuning, Senckenberg Biodiversity and Climate Research Centre explains the results of the simulation.

So why should one care if in the future seeds of rainforest trees are dispersed short-distance rather than long-distance? First of all, long-distance seed dispersal helps the genetic exchange between forest patches and makes them more resilient to change. What’s more important: the nearer a seed remains to the parent tree, it becomes less likely that it will germinate and grow. Because large-bodied fruit-eating birds predominately disperse large seeds, tree with large seeds are the ones supposedly losing out.

“Future rainforests will probably look very different in terms of tree composition than the current ones. Other studies have already shown that such future rainforests will likely be able to store much less carbon,” explains Donoso. In light of this it would be short-sighted to underestimate the looming consequences of animal downsizing, warns Schleuning: “We need to ramp up our efforts to protect large-bodied species in rainforest habitats. Only then global climate and we all will continue to benefit from the services tropical rainforests provide to us.” 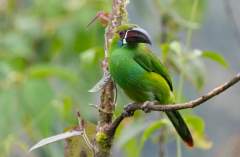 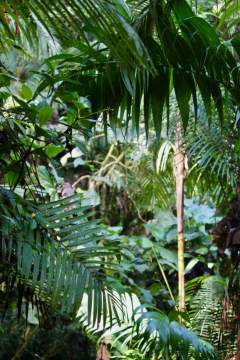 The rainforests of today (pictured a rainforest in the South American Andes mountain) are a jungle of plants with large and small seeds.