Increased biological diversity improves ecosystem functioning. A heterogeneous environment further promotes this positive effect of biodiversity on ecosystems. As more and more of the global land area is subject to intensive use, thereby becoming more homogeneous, this positive impact of biodiversity could be weakened researchers of Senckenberg and the University of Würzburg currently report in “Nature Ecology & Evolution.” In the large-scale study conducted on Mount Kilimanjaro, the researchers were able to demonstrate that species richness, in particular, improves the performance of ecosystems, while the species turnover along the elevational gradient plays a minor role.

Microorganisms, plants, and animals accomplish great feats every day. For example, by decomposing material, producing plant biomass, or pollinating flowers, they keep nature ‘up and running,’ thereby securing the livelihood of humans. Numerous studies have shown that a high biodiversity can have a positive impact on these as well as on other ecosystem functions.

“But there is another important factor at play. If the environmental conditions of an ecosystem are heterogeneous, for example, in terms of soil properties and climate, this could give an additional boost to the positive effect of biodiversity on ecosystem functions,” says Dr. Jörg Albrecht of the Senckenberg Biodiversity and Climate Research Centre.

Teaming up with other researchers, Albrecht examined whether the degree of environmental heterogeneity influences the positive effect of biodiversity on ecosystem functions. To this end, the researchers analyzed data from 13 natural and man-made ecosystems on Africa’s highest mountain, Mount Kilimanjaro. It is one of the first studies to investigate such a question in real ecosystems along an elevational gradient of more than 3500 meters.

In addition, the researchers examined which aspect of biodiversity is most beneficial to the provision of ecosystem functions: Changes in species richness or species turnover, that is, changes inthe  species composition along the elevational gradient. It became apparent that species richness plays a greater role in ecosystem functions than species turnover.

“Frankly, this came as a surprise to us, since in theory, the opposite had been assumed. Moreover, species communities in the savanna at the foot of the mountain are completely different from those in the cloud forests or at the alpine summit. Thus, species turnover is very high. In contrast, species richness, that is, the number of species that co-occur in an ecosystem, changes to a lesser extent, but is far more important for ecosystem functioning,” says Dr. Marcell Peters of the University of Würzburg.

The researchers consider the results to be evidence that regional conservation efforts should focus on preserving species richness. “Our results confirm that biodiversity is not only important on a small scale as has been shown in experiments, but that these effects become even stronger in real, large-scale landscapes. We were thus able to show that protecting biodiversity is not a luxury, but essential for maintaining functional ecosystems,” concludes Peters. 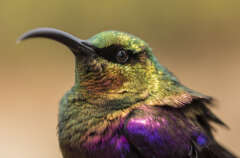 Sunbirds are very important in an ecosystem as they pollinate flowers. Photo: Maximilian Vollstädt