An international team of researchers, including Senckenberg’s Director General Klement Tockner, for the first time recorded and quantified all rivers worldwide that temporarily dry up. The scientists show that 60 percent of the world’s streams dry up for at least one day a year – across all continents and climate zones. In the study, led by Mathis Messager of McGill University in Montreal, Canada, and published today in the prestigious journal “Nature,” the researchers estimate that 52 percent of the world´s population live nearest to one of those streams – a situation that could affect far more people in the future.

For thousands of years, people have preferred to settle near bodies of water. Rivers are part of the global water cycle, an important habitat for numerous species, an economic factor, a transport route, an energy supplier, and a place of recreation. However, streams and rivers, in particular, are immensely affected by global climate change, intensive land use, and resource consumption. “Currently, research and the resulting protection measures are predominantly focused on water bodies that permanently carry water,” explains Prof. Dr. Klement Tockner, aquatic ecologist and Director General of the Senckenberg Gesellschaft für Naturforschung, and he continues, “But even large, charismatic rivers such as the Nile, the Yellow River in China, or North America’s Rio Grande, are already drying out completely. This can lead to impaired access to water for millions of people and has profound implications for the river ecosystem.”

Under the leadership of doctoral student Mathis Messager of McGill University in Montreal, Tockner and his international colleagues show in the Nature study published today that 51 to 60 percent of rivers worldwide have no flowing water on at least one day a year. In particularly arid areas of the world, such as India, western Australia, or the African Sahel, the modeling shows that this even affects as many as 99 percent of the water courses. “But even in cool temperate and moist climate zones, nearly 30 percent of watercourses can dry up repeatedly when taking in account small streams. In other words, rivers that go dry – at least temporarily – are the rule rather than the exception on Earth,” adds the aquatic ecologist. Regional examples of this are the Urselbach, an approximately 16-kilometer-long body of water with its source in the foothills of the Taunus mountains that flows through Frankfurt, and the Weil, a tributary of the Lahn, which went dry last summer. Tockner adds, “Streams that naturally dry out are valuable and unique habitats, but if a permanently water-bearing stream or river dries up, it has a massive impact on nature and ultimately on humans.”

Using hydrological, climatic, pedological, and geological data from 5615 monitoring stations, the researchers were able to show that drying rivers can be found on all continents and in all climate zones. “This has far-reaching consequences for the study and protection of rivers,” explains Tockner, and he continues, “In order to understand the future effects of climate and landscape changes on these ecosystems and their species, we need to consider the drying-out of rivers as a key parameter.” According to the researchers, not only will flooding increase in the future, but in particular also the drying-out of water bodies.

According to the study, the nearest stream or river does not continuously carry water for 52 percent of the world’s population. The aquatic ecologist is confident that the new findings will help manage rivers more sustainably and, in turn, protect the people who directly rely on these ecosystems for their livelihoods and culture. “We can now pinpoint the areas where streams do not always flow, and in a next step we intend to investigate when and for how long these dry seasons occur today and in the future, and what this means for nature and the people,” adds Tockner in conclusion. 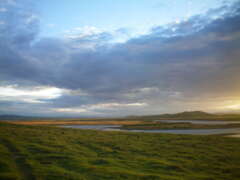 The Yellow River in China does not always have running water – it belongs to the 60 percent of streams that temporarily dry out. Photo: Zhangmoon 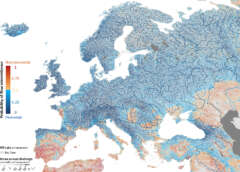 Even in cool temperate and moist climate zones, nearly 30 percent of watercourses can dry up. Map: Mathis Messager 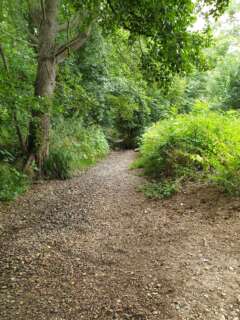 The Hessian Urselbach in July 2020 – one example of the 63 percent of streams that dry out for at least one day each year.  Photo: Senckenberg/Babitsch