Frankfurt, 05.05.2021. Visually, they are hardly distinguishable, but genetic analyses show: There are four distinct species of giraffe and seven subspecies. This result was obtained by an international team led by Prof. Dr. Axel Janke from the LOEWE Centre for Translational Biodiversity Genomics. According to their comprehensive genome analyses, the four giraffe lineages have been evolving separately for thousands of years. Relationships within the genus of giraffes have been debated before. For a long time, it was assumed that there was one, then four and later three species. The study published in the scientific journal “Current Biology” provides new insights into the evolution of giraffes and relevant information for their adequate conservation in Africa.

“New mammal species are only rarely discovered and described,” says Prof. Dr Axel Janke, head of the LOEWE Centre for Translational Biodiversity Genomics (TBG), professor of evolutionary genomics at Goethe University and scientist at the Senckenberg Biodiversity and Climate Research Centre (SBiK-F) in Frankfurt (Main). “Genomics, that is studying all genetic information of a living being, opens up new possibilities and can broaden our perspective on species and their evolution – as now happened in the case of giraffes.”

The African mammals with the long neck should be a single species, the giraffe – that was generally accepted for a long time. However, 2016 initial genetic studies from Janke’s laboratory indicated that there is not one, but four different species of giraffe. This revolutionary result, which was obtained together with the Giraffe Conservation Foundation (GCF), is subject of controversial debate among researchers and conservationists. Now, the genome analyses support the model of four species.

The analysis of about 200,000 positions on DNA from a total of 50 giraffes confirm four species, namely northern giraffe, southern giraffe, reticulated giraffe and Masai giraffe. They comprise a total of seven subspecies. The data also show that the four giraffe lineages began to evolve separately of each other between 230,000 and 370,000 years ago. There is little or no gene flow and admixture between them. This means that different species do usually not mate in the wild. In captivity, however, this is possible under certain circumstances.
“The results of the genome analysis have great significance for giraffe conservation,” says Dr Julian Fennessy, GCF director and co-author of the study. The populations have declined sharply in the past century to around 117,000 wild giraffes. Fennessy: “It now becomes clear now that the remaining giraffes belong to four different species. This further exacerbates the situation. For example, we estimate that there are less than 6,000 northern giraffes remaining in the wild. As a species, they are one of the most threatened large mammals in the world.”

Giraffes occur in the savannahs of Sub-Saharan Africa from Niger through Kenya and Namibia to South Africa. With up to six metres in height, these herbivores are the world’s largest land-dwelling mammals. Their livelihoods are being decimated in many places by the growing demand for farmland. Illegal hunting and politically difficult conditions complicate their protection. The International Union for Conservation of Nature (IUCN) classifies giraffes as “endangered” in their Red List of Threated Species. The model of four species model has not been taken into account so far – a fact, that could change now.

“The data available is more informative than ever before,” says Raphael Coimbra, researcher at SBiK-F and study author. “Our genome analyses are based on significantly more genetic data than previous studies.” In their analyses the researchers compared genomes of giraffes from all previously considered species and subspecies coming from a total of twelve African countries and zoos. Thereby, genome of the Kordofan giraffe, a critically endangered subspecies of the northern giraffe, was completely sequenced for the first time.

“In the case of giraffes, we can see that we do not yet sufficiently understand the genetic basis of biological diversity,” says Janke. “The genomes contain invaluable information, for example about adaptations to climatic conditions or the evolution of species. We are only at the beginning. But one day we will fully understand the genome and its wealth of genetic information.”

Janke and his colleagues at the LOEWE-TBG in Frankfurt, Gießen and Marburg are investigating and documenting the genetic basis of biological diversity. The research centre, which is funded by the state of Hesse, is currently building up an extensive genome collection. Researches have already sequenced more than 349 genomes of various species from worms to whales. 46 genomes of which are of particularly high quality. The data is also available to other researchers to use for concerns of society, such as nature conservation and species protection. 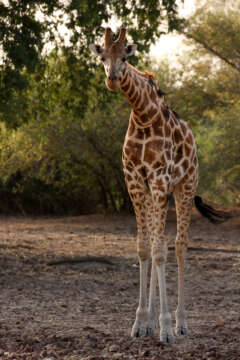 The Kordofan giraffe is one of seven subspecies within giraffes. Researchers have now sequenced its genome for the first time.
Photo: Fiona MacKay, Pretty Fly Photography

(The photo may only be used in the context of current reporting).