Senckenberg scientist Thomas Schmitt has investigated the effectiveness of diatomaceous earth and a parasitic fungus as grain protectants against stored-product insect pests in comparison to a chemical insecticide. Together with colleagues from Pakistan and Greece, he shows in the study, just published in the journal “Environmental Science and Pollution Research”, that when grain is stored for more than 150 days, the natural pesticides achieve the most effective results.


Over 760 million tonnes of wheat were harvested worldwide last year. A large part of this grain is oftenly stored for months. “It is crucial that the grain is protected from insect pests” explains Prof. Dr. Thomas Schmitt from the Senckenberg German Entomological Institute in Müncheberg and continues: “Currently, this challenge is often solved with chemical insecticides such as imidacloprid, a systemic insecticide from the neonicotinoid group. This has been produced on an industrial scale since the early 1990s and is used in about 120 countries around the world to ‘dress’ sugar and fodder beet, cereals, potatoes, maize and onions.”

Together with first author Prof. Dr. Waqas Wakil from the University of Agriculture in Pakistan, Schmitt has now tested the use of two natural substances as alternatives to the insecticide, which is suspected of having a damaging effect on birds and bees, among other concerns. “We tested the treatment with diatomaceous earth, the entomopathogenic fungus Beauveria bassiana and the insecticide imidacloprid as well as two-way combinations of these three protective agents over different periods of time and compared how many and which insect pests survived after the treatment,” report Wakil. Diatomaceous earth, which is originated by fossil diatoms, is traditionally used to strengthen hair and nails as a food additive. “For insects, however, this substance is very unpleasant: by contact it absorbs the epicuticular lipids of the insect cuticle, leading them to death due to desiccation and the pointed particles hurt larvae and the more robust adults,” adds the third author of the study, Prof. Dr. Nickolas G. Kavallieratos from the Agricultural University of Athens in Greece. The spores of the Beauveria fungus used adhere to the skin of the insect pests, penetrate the host after germination leading to death the infected individuals. These fungi are absolutely harmless to vertebrates.

The effectiveness of the three substances on the red flour beetle (Tribolium castaneum), the lesser garin borer (Rhyzopertha dominica), the rusty grain beetle (Cryptolestes ferrugineus) and the psocid (Liposcelis paeta) was investigated at different time intervals. “The combination of the different active substances – insecticide and fungus as well as diatomaceous earth and fungus – led to a better result than the use of a single agent,” the Müncheberg entomologist explains the laboratory results and adds: “This was to be expected. What surprised us, however, was the long-term effect of the compounds used!” While at the beginning of the test series the combination of imidacloprid and Beauveria bassiana showed the best effect against the insect pests, after 100 days of grain storage this combination was equally effective as the combination of diatomaceous earth and fungi. “From a storage period of 150 to 180 days, the wheat treated with diatomaceous earth and Beauveria bassiana was even less infested with pests! Cereals are often stored for more than half a year – the natural pesticides we tested could thus be a good alternative to chemical insecticides,” Schmitt gives an outlook. 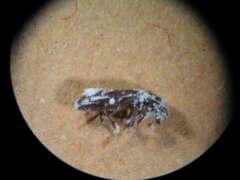