Przewalski’s Horse: The Long Way Back into Freedom

The wild horses’ population not threatened by inbreeding

Senckenberg scientists have discovered that the population of Przewalski’s Horse is not threatened by inbreeding. Genetic analyses reveal that the wild horses reintroduced into the wild since 1992 do not show a decreased genetic variability, despite the small breeding population. The study was recently published in the “Mongolian Journal of Biological Sciences.”

Przewalski’s Horse (Equus ferus przewalskii) is the last surviving species of wild horse – however, since 1969 it has been considered extinct in the wild. Since it was possible to continue breeding the remaining animals in captivity, the species could be preserved until today. “The current population goes back to a mere twelve horses that produced offspring while kept in zoos – a genetic bottleneck that carries the risk of diseases caused by inbreeding, such as a reduced resistance or shortened life expectancy,” explains Prof. Dr. Dr. h.c. Hermann Ansorge of the Senckenberg Natural History Museum in Görlitz, and he continues, “Under these conditions, attempts to reintroduce the Przewalski’s Horses into the wild pose a serious challenge. A species can only react to environmental changes if it has a high level of genetic variability!”

In 1992, the first successful attempts began to reintroduce the Przewalski’s Horse in its former home, the Mongolian steppe. Today, about 746 individual horses can be found there in the wild again. In recent years, an international team took a closer look at the reintroduced Przewalski’s Horses and at historic collection materials. The researchers examined a total of 130 skulls from a period of 110 years. The comparison of non-metric characteristics revealed insights into the genetic variability. “This involves defined manifestations on the skull whose appearance can be differentiated qualitatively,” explains Ansorge, and he adds, “For example, these can be small natural openings that serve as passageways for blood vessels or nerves. Differences in the appearance and symmetry of these characteristics allow us to draw conclusions regarding the genetic differences.”

The analyses reveal that, contrary to previous assumptions, the reintroduced populations of Przewalski’s Horse show a comparatively high genetic diversity. The study’s lead author and head of the reintroduction program, Dorj Usukhjargal of Hustai National Park in Mongolia, expresses his surprise about the research results. “We initially expected that, due to the long periods of inbreeding, the populations of Przewalski’s Horses might be too closely related genetically to ensure their long-term survival in the wild.”

Usukhjargal explains the fact that Przewalski’s Horses now appear to have much better chances for survival in their natural environment with the animals’ carefully considered selection. “The horses that are intended for release in the wild must generally have good genetic preconditions; in this regard, we already made a preliminary selection. In addition, in the past decades, the zoos and wild animal reserves have improved the genetic diversity of their stock by keeping strict breeding records and engaging in exchange programs.” According to the study, no indications were found of a reduced developmental stability in the reintroduced Przewalski’s Horses.

“After the Przewalski’s Horse practically went extinct 50 years ago, the chances for the long-term survival of this last wild horse species now look much better than expected,” adds Ansorge in closing. 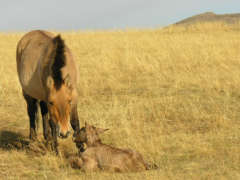 A mare of Przewalski’s horse with her foal.
Photo: Dorj Usukhjargal