Together with a group of international colleagues, Senckenberg scientist Ralf Britz has described a new species of the fish genus Danionella. Due to the transparent body and lack of the skull roof, the brain is visible in the live fish. This species is therefore considered an ideal model organism for neurophysiological research. The new discovery is presented today in the journal “Scientific Reports.”

Due to their miniature size, simplified anatomy, and truncated development, combined with a highly specialized communication system, fishes of the genus Danionella are important model organisms for neurophysiological studies. “The tiny body size of these fishes, which only measure between 11 and 17 millimeters in length and belong to the carp family, makes it particularly difficult to distinguish between the different species. Especially for model organisms it is essential, however, to clearly determine their species identity,” explains Dr. Ralf Britz from the Senckenberg Natural History Collections in Dresden.

Britz and his colleagues, Kevin Conway of Texas A&M University and Lukas Rüber of the Natural History Museum in Bern, have now described a new species in this genus. “Using a combination of classical taxonomic methods and molecular approaches, we were able to show that the fish studied in several neuroscientific laboratories around the world and referred to as Danionella translucida actually represents a previously unknown species,” adds Britz.

The newly discovered fish are no more than 13.5 millimeters long and inhabit various rivers in the southern and eastern foothills of the Bago Yoma Mountains in Myanmar. There they prefer to stay in the cooler layers below a depth of about 30 centimeters with temperatures of only 25 degrees Celsius. “In terms of their lifestyle as well as their external appearance, the fish are almost identical to the already known species Danionella translucida, whose habitat they also share – but their internal characters show significant differences in some areas. And our genetic studies also indicate that the two species are only distantly related,” explains the ichthyologist from Dresden.

The international team has therefore described and named this new species of tiny fish. With the epithet cerebrum, the Latin word for “brain,” the new scientific name Danionella cerebrum draws attention to the fact that this fish has one of the smallest known brains among vertebrates. 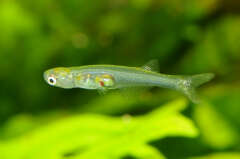 The tiny fish as a cleared and stained specimen. Photo: Senckenberg