When the Forest Left the Apes

An international research team around Prof. Hervé Bocherens of the Senckenberg Centre for Human Evolution and Palaeoenvironment at the University of Tübingen and his PhD student Sophie G. Habinger has reconstructed the habitat of the ancestors of orangutans in present-day Myanmar as part of the collaborative project EVEPRIMASIA between the Universities of Tübingen, Germany, and Poitiers, France. The results of the study, recently published in the journal “Scientific Reports,” highlight the orangutans’ dependence on intact forests and the need to protect their remaining refuges and habitats.

Unlike other great apes such as gorillas or chimpanzees, orangutans (Pongo) have several known fossil ancestors. Today, orangutans are restricted to the islands of Borneo and Sumatra in Southeast Asia, where they are critically endangered. “Their ancestors’ range in the late Miocene, on the other hand, extended over a vast area from Turkey, through easternmost Pakistan, India, Nepal, and Myanmar to Thailand,” reports paleobiologist Sophie Habinger. The study focuses on the orangutan’s ancestor Khoratpithecus ayeyarwadyensis, whose fossils were found in the Irrawaddy Formation in modern-day Myanmar, as well as other fossil representatives of the subfamily Ponginae, such as Indopithecus, Sivapithecus, and Gigantopithecus. The reconstruction of their habitat and its use allows important conclusions about the requirements and protection of today’s orangutans. “In order to develop efficient strategies for the protection of endangered species, we need a sound understanding of their ecological flexibility. One way to obtain this information is to study the ecology of their ancestors,” explains Hervé Bocherens, the study’s last author.

The researchers used a technique for measuring stable carbon and oxygen isotopes in fossil tooth enamel to reconstruct the habitat of the orangutan ancestor K. ayeyarwadyensis and the associated mammal fauna. In the late Miocene, the terrain of the Irrawaddy Formation – a rather barren region today – featured a mosaic of dense and open forest patches interspersed with rivers. K. ayeyarwadyensis likely foraged for fruits and leaves in the upper reaches of the canopy. “The habitat of K. ayeyarwadyensis was therefore very similar to that of present-day orangutans. Overall, the comparison with other ancestral forms such as Sivapithecus also shows that the species occupied similar ecological niches – all were tree dwellers that fed primarily on fruit. At the same time, we were also able to reconstruct obvious differences in habitat use – for instance regarding food composition – and thus an adaptation to a very specific niche,” says Bocherens.

During the Pleistocene, the habitat of the Ponginae shifted southward, probably due to an increasingly cooler and drier climate that led to changes in the vegetation and a thinning of forests, causing the orangutan’s ancestors to disappear. “The results of our study suggest an ecological continuity between all fossil and present-day Ponginae. Here, the shift in their range within the last ten million years suggests a low tolerance of this group for less forested and drier ecosystems,” explains Olivier Chavasseau of the Université de Poitiers. Habinger elaborates on the implications of these findings for present-day orangutans. “Orangutans in Sumatra and Borneo are under constant pressure due to human activity and habitat loss. If the forest there continues to be further fragmented by clearcutting, the orangutans will face the same fate as their ancestors – they will become extinct. This must be counteracted by efficient conservation measures to protect their habitat.” 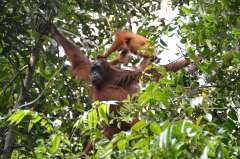 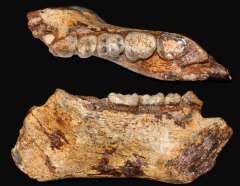 To reconstruct the habitat of Khoratpithecus ayeyarwadyensis, the researchers sampled a mandibular molar for stable isotope analysis. Photo: Olivier Chavasseau